“Undocumented workers from Latin America are 80% of the labor on Wisconsin dairy farms,” says “Milked” author Ruth Conniff. Photo courtesy of Shutterstock.
Workers from Mexico are the backbone of the Midwest dairy industry. For her book “Milked,” journalist Ruth Conniff spent time with dairy farmers and workers on both sides of the border.
This interview had been edited for length and clarity.
KCRW: What percent of workers on Midwest dairy farms are from Mexico?
Ruth Conniff: I don’t know how to separate the Mexican workers from other Latin American workers, but they’re mostly from Mexico. Undocumented workers from Latin America are 80% of the labor on Wisconsin dairy farms.
During what period of time did this happen? And why?
It’s happened over the course of the last couple of decades. It’s tied to the “get big or get out” trend in agriculture. Wisconsin is the number one state for farm bankruptcies in the country, and we’ve lost family farms at the rate of one to two per day in recent years. The farmers who have managed to survive have had to grow their operations to hold on through low milk prices, and the consolidation of dairy farming.
Around 2000, a lot of farms were looking to expand for the first time, and they were hiring employees. They had been all family-run operations until that point – they were growing from 50 cows to 500 cows very rapidly, and they began looking around for employees. The farmers that I interviewed for my book talk about how frustrating and difficult it was to try to find workers locally, and how relieved they were when they connected with Mexican workers who had come up to do seasonal work in the Christmas tree farms in the area. [They found that those workers] were interested in doing year-round jobs. And so they moved [to the U.S.] to milk cows on dairy farms. 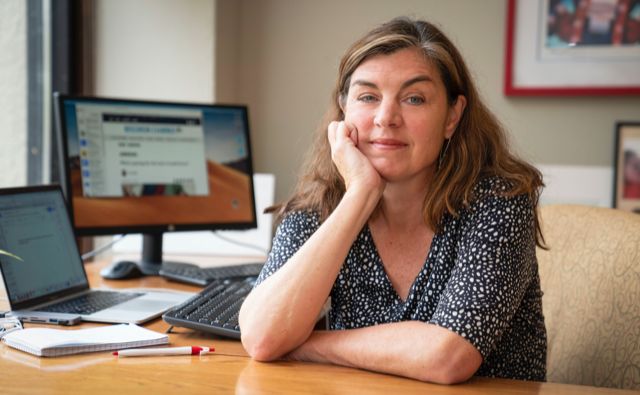 Journalist Ruth Conniff spent time with dairy farmers and workers on both sides of the border. Photo by Greg Anderson, courtesy of the Wisconsin Examiner.
One gets the sense that many of the people who own these dairies are white and likely conservative, perhaps Trump supporters. But they have strong ties, almost like family in some cases, with these Mexican and other Latin American migrants who have settled in their communities and work in their facilities.
That was one of the things that most interested me in doing the reporting for the book is that it’s Trump country. When you drive through rural Wisconsin, you see huge Trump banners in the cornfields. There are a lot of multigenerational Republican voting families there. Yet, some of the same farmers, and the farmers that I talked to who voted for Trump twice, have longtime relationships with their Mexican employees, and have been going down to Mexico to visit their employees’ families for years. They have a really deep sense of connection to these rural people.
As one farmer explained it to me, it’s an agrarian community. The farmers felt a strong connection to other people who found farm work honorable, unlike many Americans who don’t find farm work honorable. [The farmers] worked with them on their farms, because they’re not employers with big corporate operations who are simply hiring employees. There are people working side by side with the workers on their farms.
These are two groups of rural people who’ve really been thrown together by some of the same global economic forces. So they’re agrarian, they grew up doing farm work, and they are struggling in a global economy that makes it really hard to make a living that way. They find themselves working together, and through these last couple of decades, they have built a deep sense of connection and economic interdependency.
So much of the unemployment that caused all of these economic migrants to come up from Mexico are a direct result of NAFTA and policies that allowed us to sell cheap corn in Mexico.
About 900,000 subsistence farmers in Mexico were driven off their land when the United States dumped a lot of cheap subsidized corn on Mexico, where corn is almost an object of reverence. [This was] a result of NAFTA, and this is an interesting connection to the Trump voting farmers as well. A lot of farmers talked about voting for Trump the first time because they liked what he had to say about NAFTA, how it was a bad deal for people like them, how he was going to represent the interests of the little guy and the forgotten men and women of America. That global trade agreement was really hard on farmers in the Midwest, and it was really hard on Mexican farmers who have really struggled in the wake of that agreement.
What I found so fascinating were the portraits that you described of these older, white, conservative men actually traveling to these small villages in Mexico. Did this start through a program?
It was the brainchild of a local high school Spanish teacher Shaun Duvall in Alma, Wisconsin, who was contacted by the University of Wisconsin agricultural extension agent in her area. She was asked to translate for farmers and the Spanish-speaking workers that they were having trouble communicating with on their farms. She began traveling around to farms in Western Wisconsin and serving as a translator, and also kind of an ambassador of cultural understanding between Mexican workers and Wisconsin dairy farmers.
After a lot of translating, she decided to set up night classes in her classroom in the Alma school, and she taught Spanish to the farmers and English to the workers at night. But she didn’t make a whole lot of progress with the language instruction. So she decided she would take the farmers down to Cuernavaca, Mexico, where she had gone to language immersion school for a week when she first became a Spanish teacher. She took a group of farmers down to this language immersion school and they spent the week there.
They had a free weekend at the end of the time, and they decided to go visit some of their workers’ families. They went to this little mountain town, and they had this really moving experience of meeting the families of their workers – parents who were really grateful to them for taking care of their sons and daughters, and giving them employment. It opened their eyes to a whole different world that they hadn’t really been aware of. And they began going every year, and Duvall created a nonprofit called Puentes/Bridges. She takes a group every year, and it just has become a touchstone for these farmers, for their workers, and families. 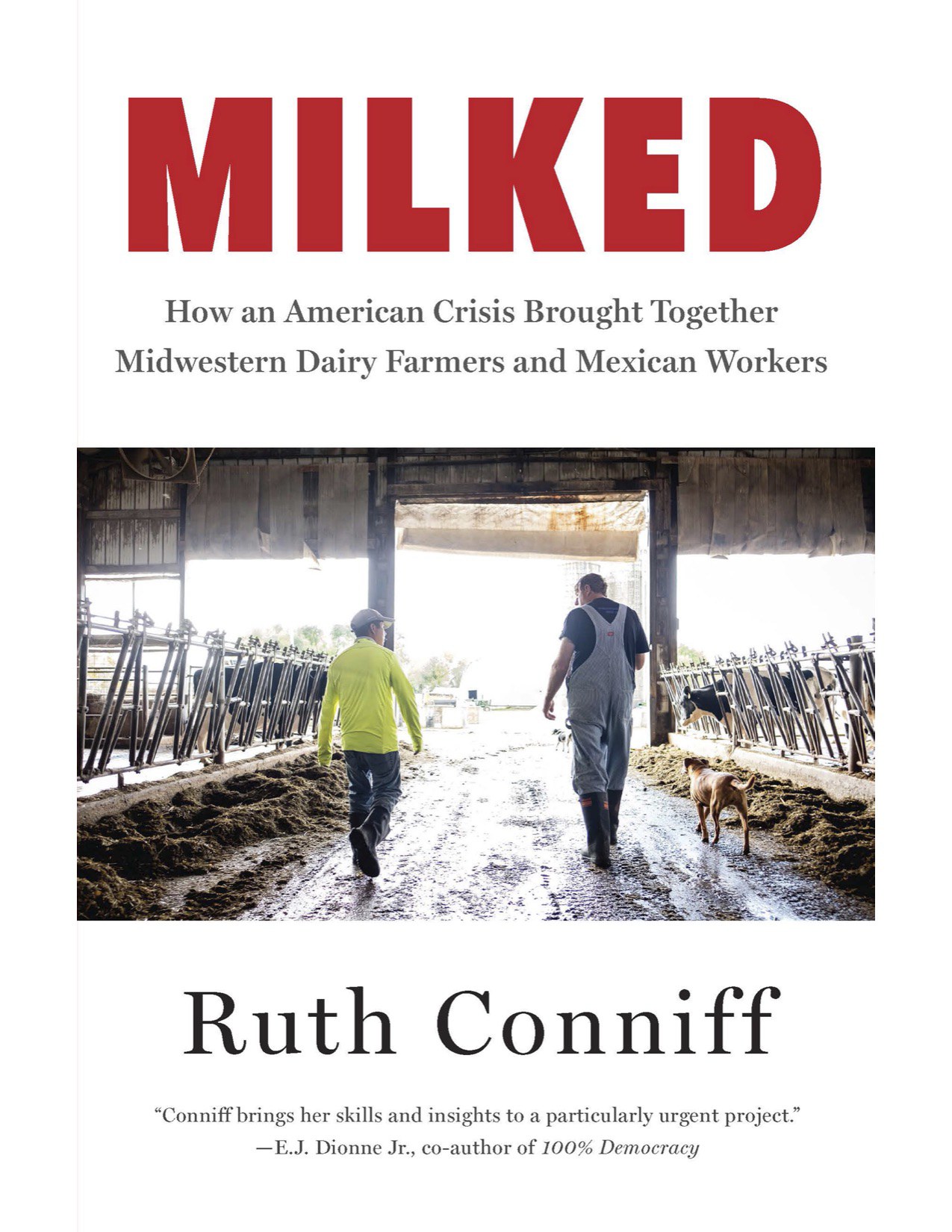 “Milked: How an American Crisis Brought Together Midwestern Dairy Farmers and Mexican Workers” describes the unlikely friendships cultivated between  owners and undocumented workers. Photo courtesy of The New Press.
Could you share the story of the farmers and workers that you got to know, that you found to be particularly instructive or moving?
I was particularly moved by the story of Bill Brown, who was a very shy guy, and who did vote for Donald Trump twice. His employee Blanca Hernandez, a very energetic, powerful woman, came up and worked on the town farm. When Bill talks about Blanca, he starts to cry because he’s so appreciative of all that she did to help organize and get his farm in better shape, and allow him to survive, and keep going.
Blanca came to the United States four times. Once, she smuggled herself in the trunk of a car and almost suffocated, and she went through tremendous hardship walking through the desert at night, and getting here, and working really hard to save money.
Now she is a teacher back in her town San Juan Texhuacán in Veracruz, Mexico. She teaches bilingual education and has a mission to the children who are very poor in that area. She went to their homes during the pandemic and set up learning corners for them. She was careful to do math instruction using materials that they could easily come by because they couldn’t afford school supplies. So she has little sticks and leaves, and she lights up when she talks about that.
But it inverts the popular political narrative about immigration and the idea that somehow the Mexican workers who come here illegally – and they’re almost all illegal on the dairy farms because there is no year round visa for low skilled agricultural work – that they’re taking advantage of a system here, and they are providing an enormous economic boon.
I think that the story of the connection between Bill and Blanca just shows this real interesting sense of kinship between these two groups of rural people. The fact that Bill was a Trump voter didn’t really seem to make any difference in terms of his admiration and affection for Blanca. Blanca, who doesn’t see herself in any way as a victim, is just a really powerful, can-do woman. I think in some ways she embodies that can-do entrepreneurial spirit that Americans like to think of as an American quality.
More from Good Food
Latest
From this Episode:
Chuseok, milk, bananas, school lunch
Food & Wine Best New Chef Ji Hye Kim puts a Midwestern spin on classic Korean dishes to celebrate the harvest festival known as Chuseok.
10 min
Undocumented workers from Latin America are 80% of the labor on Wisconsin dairy farms. For her book Milked, journalist Ruth Conniff spent time with dairy farmers and workers…
11 min
Banana diversity in India makes the fruit ubiquitous and vital to the country’s culture. Anthropologist Deepa Reddy explains.
12 min
Attorney generals in Republican states have filed a lawsuit against the USDA and its non-discrimination policies which may leave some students with empty lunch trays.
6 min
Chef Reem Assil went from advocating for social justice rights to building a community through food.
10 min
At the Santa Monica Farmer’s Market, Shiho Yoshikawa shops for black mission figs which she transforms into an ice cream back at Sweet Rose Creamery.
8 min

Featured
The best of what to see, hear, eat, do, and more.
KCRW Board Member Norris Bishton and Debra Bishton are stepping up to match all of today’s donations, up to $25,000. Help raise $50,000 for KCRW!
DONATE NOW
Get the latest from KCRW in your inbox 3x a week.