Review your content’s performance and reach.
Become your target audience’s go-to resource for today’s hottest topics.
Understand your clients’ strategies and the most pressing issues they are facing.
Keep a step ahead of your key competitors and benchmark against them.
add to folder:
Questions? Please contact [email protected]
Increasing enmity between China and the West, stemming from China’s increasingly aggressive actions regarding Taiwan, China’s COVID-zero policy and a whole host of other issues facing foreign companies that do business in or with China, has caused foreign companies that do business in or with China to reassess. See Nancy Pelosi’s Visit to Taiwan is Really Bad for Your China Business and Sourcing Product From China Just Got Even Riskier.
With all that has been happening, the international manufacturing lawyers at my firm have been seeing an uptick in phone calls and emails from companies looking to leave China. Most of these companies want to know more about Mexico.
I asked my good friend Andrew Hupert to explain what is involved in moving manufacturing from China to Mexico, in large part by comparing the two countries. I chose Andrew for this near-Herculean task because he has spent so much time in both countries navigating their manufacturing systems from the inside. My law firm frequently consulted with Andrew when we first started doing China legal work in a big way and at that time Andrew was living in China. Though Andrew had for decades tied his life and career to China, like me, he was one of the early proponents of a post-China manufacturing world. So much so that Andrew moved to Mexico, reinvigorated his Spanish language skills and began helping companies — especially companies looking to leave China — navigate Mexico. Who better, then, to write about what it takes to leave China (in whole or in part) for Mexico than Andrew Hupert?
The below is part four of what will be a long-running series. This episode deals with negotiation tactics, which is something Andrew knows a lot about as he has taught many negotiation courses at leading business schools around the world.
Over to Andrew for Part 4 . . . .
Western managers with China experience know the challenges (and risks) that come with cross-border negotiations. Those considering a move to Mexico will have to navigate a new set of cultural adjustments.
1. End of the Story First
Chinese negotiators are known for being PATIENT PRAGMATISTS. They will wait as long as they have to for the right opportunity or resource. But when they feel a counterparty’s utility value is gone, they will turn to another opportunity — already under development. Mexican negotiators are DECISIVE but SKEPTICAL. They will assess you, assess your offer, and assess their environment before making a decision. The suddenness of their decision-making may seem jarring to you if you are accustomed to China — especially if the answer is a definite NO. In Mexico the ability to decide on a next step is the sign of leadership, unlike China where caution is often more highly valued.
The general vibe of the negotiating process is also different. Chinese negotiators want the process to move forward. They like negotiating — they see it as intrinsic to their identity as managers and as a basic leadership skill. Mexican negotiators usually don’t consider deal-making to be their main job. They want the negotiation over so they can get to work.
2. Analysis
Let’s dive down and take a look at three key differences US/Euro negotiators should keep in mind when working with counterparties from China and Mexico.
A. The Cultural Profiles
My main tool for analyzing cultures is “Hofstede 6 Dimension Cultural Comparison tool“. There are 6 dimensions of culture. Each culture is ranked based on their position between POLAR OPPOSITES. 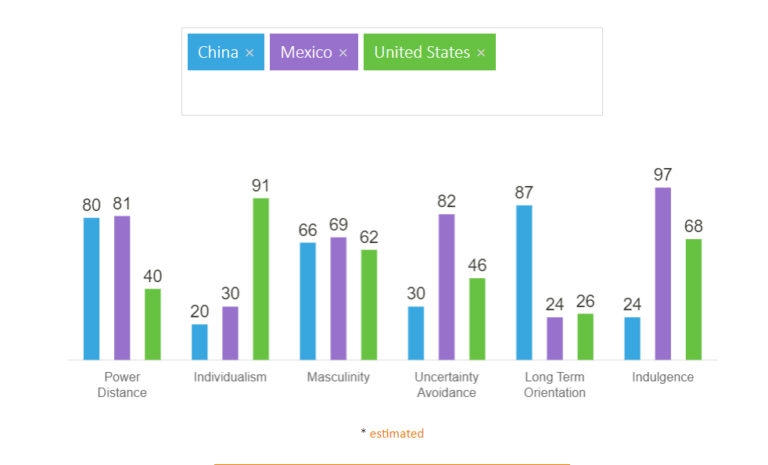