As Latina mothers searching for reading options for their children, Patty Rodriguez and Ariana Stein recognized right away that the publishing industry was lacking in bilingual books for kids. Rodriguez wanted a bilingual-first selection of books to read to her two sons. Stein knew as soon as her son was born, she wanted him to be bilingual and that her desire to make this happen needed to begin when he was still a baby.
In 2014, Rodriguez and Stein created Lil’ Libros, an independent bilingual children’s book publisher based in Los Angeles. Their mission was to “introduce bilingual literature and Latine culture through picture books,” which they felt would help inspire parents to read to their children in two languages.
“We believe children’s books are seeds that when nourished, allow for a child to turn their dreams into reality,” the company’s website reads. “Our goal is to make the world a better place by providing authentic stories that promote inclusivity and love.”
Through a partnership with Remezcla and Target, Lil’ Libros has come together with graphic design company With Vivid Color to celebrate Latin American culture – and the important figures in its history – in places that need it the most. The collaboration aims to boost visibility of Latine-owned brands available at Target.
Through Lil’ Bibliotecas, a series of five mini-libraries created by Lil’ Libros and With Vivid Color, Latine families in east Los Angeles neighborhood, Boyle Heights, who are in need of reading materials for their children will have access to the bilingual books in Lil’ Libros catalog. This year alone, Boyle Heights’ Benjamin Franklin branch library shut down for major repair and renovations and is expected to stay closed through early 2023. 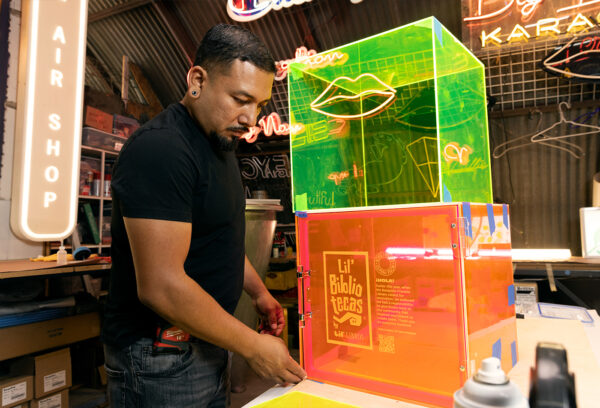 The Latine culture explored and embraced through Lil’ Libros will be the main inspiration behind each of the five Lil’ Bibliotecas. The overall design for each will be inspired by a Lil’ Libros classics, including, “Loteria: First Words / Primera Palabras,” “Lucha Libre: Anatomy / Anatomía,” “Counting With / Contando con Frida,” “The Life of / La vida de Pelé” and “Singing / Cantando De Colores.” It’s a community effort between artists, fabricators and local families to ensure that Boyle Heights regains its access to books.
Parents Julien Bleser and Sharnae Caceres, who own With Vivid Color, are determined to fill the literary gap in the area with their creativity. Along with helping spread the word about the importance of Lil’ Bibliotecas in the neighborhood, they will use their talents as graphic designers to add unique hand lettering and designs to each of the pop-up libraries. 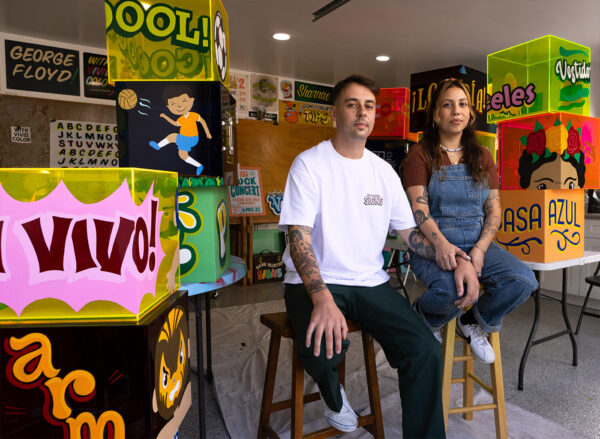 The selection of books in Lil’ Libros’ catalog is eclectic. From biographies to geographies to culturally resonant subjects, Lil’ Libros has a story that every child will enjoy. In its selection of biographies, the publisher offers books on several notable individuals across a vast range of industries. This includes bios on Evelyn Cisneros (the first Latina prima ballerina in the United States), Dolores Huerta (a labor and civil rights activist) and Walter Mercado (an astrologer and TV personality). Lil’ Libros even has a book honoring Oscar-winning filmmaker Guillermo del Toro (The Shape of Water) that tells his story through the eyes of del Toro as a child.
In its “Vámonos” series, Lil’ Libros introduces young readers to a variety of Latin American cities across the world including Santo Domingo, Dominican Republic, Tegucigalpa, Honduras, Panama City, Panama, Bogotá, Colombia, Lima, Peru, and Oaxaca, Mexico, among others.
Then, there’s Lil’ Libros’ books that cover an array of cultural topics including Dia de Muertos ofrendas (altars), telenovelas, Mexican food, lotería and lucha libre. In the book “My Mind is a Mountain,” a little boy goes on a journey to discover his emotions. It is described as “a metaphor for the heights a mind can reach in powerfully handling all emotions from the lowest of the lows to the highest of the highest – and everything in between.” In the book “Sana, Sana, Colita de Rana,” which is inspired by a classic rhyme that many Latine children grew up hearing, a little girl, who’s an aspiring Mexican wrestler, goes on a quest to face her fears alongside her plush sidekick, Mr. Frog.
The books published by Lil’ Libros are circulated internationally through several distributors. Earlier this year, Lil’ Libros became the first community-owned children’s book publisher in the country.
“Our community really values literature and education,” Rodriguez told comedian Felipe Esparza on his podcast What’s Up Fool in 2020. “Parents want to give their kids access to these things and find these resources to celebrate who we are.”