member station
Support
This is a big weekend for live music in Las Vegas. Besides the normal complement of concerts and residencies in town, there are two festivals happening.
And then we have the likes of Alejandro Fernandez. Gloria Trevi, Los Angeles Azules, Banda MS. Those performers are huge to Mexicans and other Spanish-speaking residents in Nevada.
Those and many others will be in Las Vegas this weekend, playing on the Strip to capacity crowds who are celebrating Mexican Independence Day.
One local who knows a thing or two about Mexican culture is Carlos Ochoa. As DJ Ocho, he spins contemporary Mexican and Latin artists on KRGT, or Latino Mix 99.3-FM.
He said the holiday is about pride, “and in being Mexican, music is just something you always have.” When he first moved to Las Vegas, there weren’t that many shows, but now the holiday has turned into a week-long, city-wide celebration. And casinos embrace it, as well.
“Some will have mariachis playing around the casinos,” Ochoa said. “I know they make a big deal when the boxing matches come, they roll at the red carpet, literally a red carpet, as well. They’ll have the music. They’ll take over the whole area right there in front of the MGM front desk and they’ll just blow it up, so yeah, the casinos actually embrace it.”
Thursday night, Grupo Firme, one of the biggest bands in Mexico, nearly sold out Allegiant Stadium. And this weekend is packed with big acts: Santana, Fernandez, Enrique Iglesias.
Does it matter if not all the acts are Mexican? Pitbull, playing Zappos Theater, is Cuban; Iglesias is from Spain.
“I think they just represent the Latino culture,” Ochoa said. “Not just them, but you also got next weekend. Bad Bunny, who is the hottest thing right now in Latin music. At the end, it’s just saying Latino. If you’re Latino, you’re behind it. “
Some music festivals come and go, but Life is Beautiful is a bona fide Las Vegas fixture.
It debuted in 2013, headlined by local rock giants The Killers. And it shot high: create a music festival rounded out by gourmet food, art and speakers.

Attendees raved about the event’s unique footprint, which encompassed nearly 20 city blocks in the heart of the Fremont East district in downtown Las Vegas.
And despite a few hurdles —there was no festival in 2020 due to COVID-19— Life is Beautiful remains one of the most successful festivals in Southern Nevada. Last year’s edition saw more than 180,000 people attend over its three days.
Craig Nyman is the festival’s head of music and programming who has been with Life is Beautiful since day one and joins State of Nevada host Joe Schoenmann.
And he loves his job. He said there’s no greater feeling than building a festival site with people who are “the most amazing professionals, super talented, and collectively, we’re just a big family.” He said the full lineup matters to him –not just the top acts of Arctic Monkeys, Calvin Harris and Gorillaz– but everyone who’s middle- and lower-tier.
“It’s the opportunity to really curate a lineup that we hope our fans will like,” he said.
And there’s a few local bands on the bill, including The Soul Juice Band on a main stage. Then on the local stage will be the winners of Battle of the Bands: Arrlo, Decaying Tigers, The Dollheads, Jae Douglass, Secos and Tanna Marie.
Life is Beautiful was founded by the late Zappos CEO Tony Hsieh.
“If it wasn’t for Tony Hseih, I would not be living the dream that I’m living for the last decade. Tony was a friend to all, he really felt superhuman, and he believed in this festival,” Nyman said. “I believed in this team and he believed in the greater good. And every day that we get a chance to work on this festival … I can give back to Tony, his legacy, and what he’s meant to not only the festival, but the downtown community and thousands of others.”
For an even deeper experience, check out the food and art lineups.
“We have a very large Las Vegas artist presence this year on the footprint, so people will see a lot of their favorite local artists and their touches to the festival,” he said. 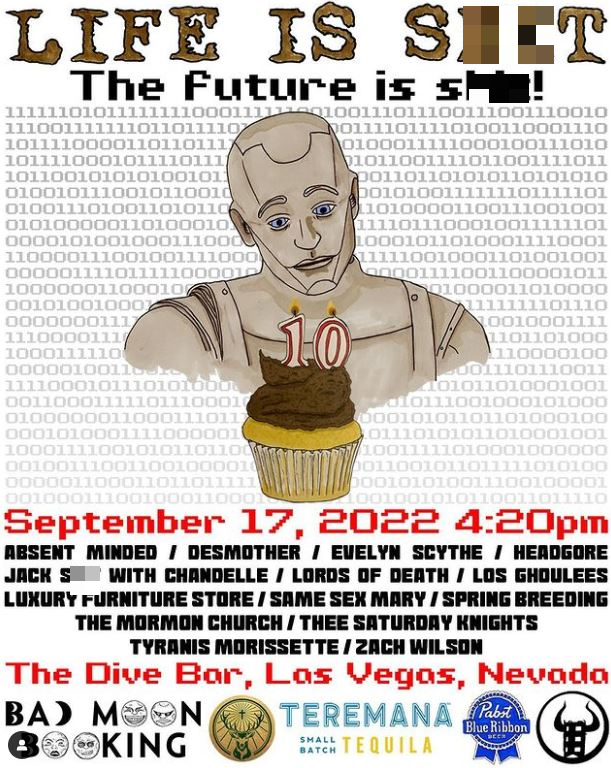 And there’s another music festival that sprang up to, in some ways, counteract Life is Beautiful some ten years ago. It’s also this weekend and it’s called Life is S— Festival. You can fill in the letters.
The name, though, is far more irreverent than the actual festival.
This scatalogically-named fest was started as an answer to what the founders saw was the PG-rated Life is Beautiful festival. And it takes place in a single tavern, Dive Bar on Maryland Parkway.
Tsvetelina Stefanova of Bad Moon Booking organizes the festival. She’s also a founding member of local band Same Sex Mary, which will also play Saturday’s event. 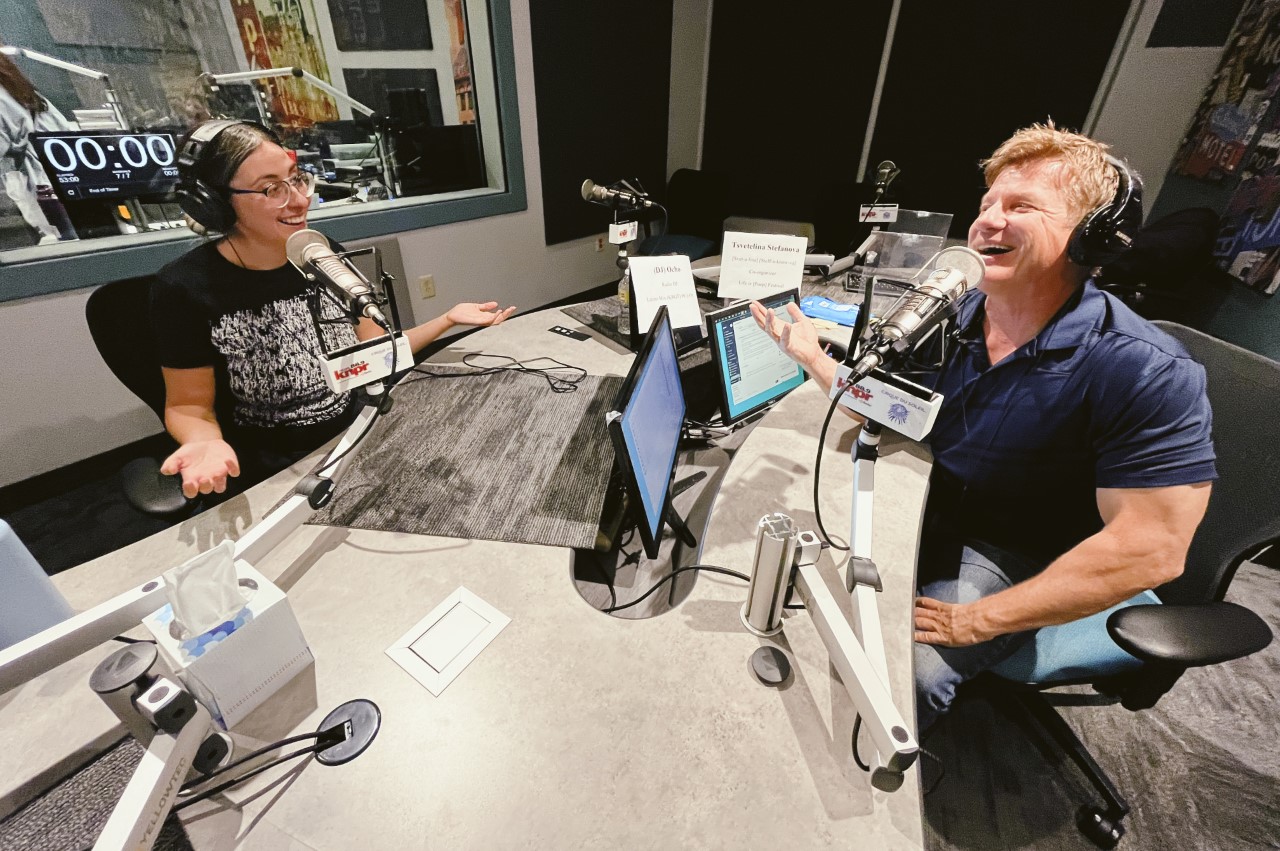 “We all get together and celebrate the local community, whether it’s music, art, poetry, it’s just a way for us, those that feel displaced, to get together and really celebrate our community,” she said. By displaced, she means literally – “at least a lot of people are physically displaced, and monetarily cannot afford certain festivals.”
Her festival is donation-based, so no one is turned away. But the donations go to a greater cause, Girls Rock Vegas.
“It’s really an amazing organization that we’re so proud to support,” she said. “Once a year, I believe it’s in June, it’s a week-long camp. And the kids get together and form bands … and through the week, write a song together and at the end of the week, they perform the song to everyone and it’s just a really amazing experience.”
Since the pandemic, the local music scene has changed a lot, and Stefanova is no stranger to that. She wouldn’t say floundering, but said that it has felt a little disjointed.
“I’m feeling super positive about where things are going. I think that not having [the Bunkhouse Saloon] is a big blow to all of us. That was a huge hub and all of its transitions …. But there’s new places, and hopefully even more.”
So where is local music happening regularly?
The Dive Bar, where ther festival will be held on Saturday, the new Sand Dollar Lounge in Plaza, The Usual Place, Artifice and Recycled Propaganda.
Another loss in the local music scene: musician Blair Dewane, who was the singer of Rusty Maples for several years and died earlier this week.
“I don’t know that I could even put into words how big of a loss … we’re just completely devastated,” Stefanova said. “For the music community, we’re just at a loss, he was just just such a spirit, you know, incredible talent and sense of humor, and just someone that lit up a room as soon as he walked in and opened his mouth and probably said something inappropriate.”
Life is S— Festival starts at 4:20 p.m. on Saturday.
Carlos Ochoa, aka DJ Ocho, KRGT/Latino Mix 99.3-FM; Craig Nyman, head of music and programming, Life is Beautiful; Tsvetelina Stefanova, promoter, Bad Moon Booking and musician, Same Sex Mary
View the discussion thread.
© All Rights Reserved. | Privacy Policy